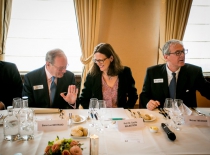 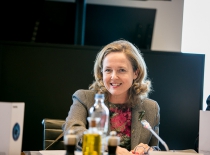 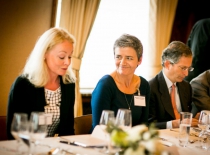 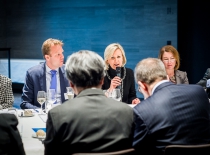 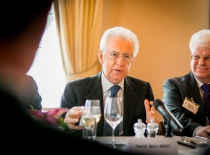 AECA in Brussels is an established and trusted high-level forum where senior business leaders and policy-makers meet together to examine and discuss issues and challenges of common interest and concern. At the heart of AECA activities is the programme of round-table debates. The number attending each event is restricted to the number that can be seated around one table. This format for the meetings allows for an intensely focused and highly interactive exchange of views between the speaker and participants. The meetings are held under the Chatham House Rule (*) to provide anonymity to speakers and encourage openness and the sharing of information. These conditions allow for uniquely open and frank discussions between senior members of the business, political, government, diplomatic and academic communities, that lead to constructive and effective outcomes, creating added value for all involved.
The annual AECA Reception is regarded as one of the landmark networking events in the capital of Europe. Twice a year, at the time of the change of the rotating Presidency of the EU Council, AECA organises a key round-table meeting at which the incoming Head of Coreper presents the priorities of the Presidency for the coming six months.
The AECA programme is a work in progress, many events being scheduled at relatively short notice to ensure topical relevance, and to anticipate and preview new issues and trends as they arise. The involvement of members and benefactors is important to AECA, and they are encouraged to share their ideas and wishes regarding themes and speakers. (*) When a meeting is held under the Chatham House Rule, participants are free to use the information received, but neither the identity nor the affiliation of the speaker(s), nor that of any other participant, may be revealed.

Speakers invited to AECA events are key players in decision-and policy-making making processes. They are leaders in their field who join us to share their expertise, experience and vision. They find that the participants at AECA meetings are a helpful and reliable sounding-board, and welcome the valuable feedback “from the field” based on what is both current, and emerging.
Guest speakers at AECA events typically include: - Heads of State and Government; - Presidents, Commissioners and high level officials of the European Institutions; - Committee Chairs and Members of the European Parliament; - High-level representatives of International organizations such as NATO, WTO and IOC; - Ministers and Secretaries of State; - Ambassadors, governors and senators; - Deans and professors of prestigious universities; - Chairmen and CEOs of leading multinationals; as well as - Founders and leaders of various organisations in all domains.
Prof. Dr. Martin SelmayrSecretary General, European Commission “An insider’s view of Europe’s Future, Strategy and Leadership” Virginia M. (Ginni) RomettyChairman, President and CEO, IBM - USA “Digital Competitiveness: A Global Perspective” Didier ReyndersBelgium’s Deputy Prime Minister & Minister of Foreign and European Affairs “The European Union and the United States – Privileged Partners in a Complex World” Raffaele Mauro PetriccioneDirector General, DG Climate Action (CLIMA), European Commission “Fighting Climate Change through 2050 strategies – The EU vision for a Clean Economy” H.E. Mr. ZHANG MingAmbassador, Mission of the People's Republic of China to the EU “Strengthening the EU-China economic relationship” Sir Julian King Commissioner for Security Union, European Commission “Towards an effective European (cyber)security policy” Ann Mettler Head of the European Political Strategy Centre, European Commission “The Future of Europe and the Road to Sibiu” Klaus Welle Secretary General, European Parliament “What is changing in Europe - Preparing Europe for the next 25 years” Mr. Margaritis Schinas Chief Spokesperson, European Commission “Europe through the media lens – The State of the Union speech” H.E. Mr. Gordon D. Sondland Ambassador, U.S. Mission to the EU “The European Union and the United States – Privileged Partners in a Complex World”
Download the full list of AECA speakers (2012-2019)